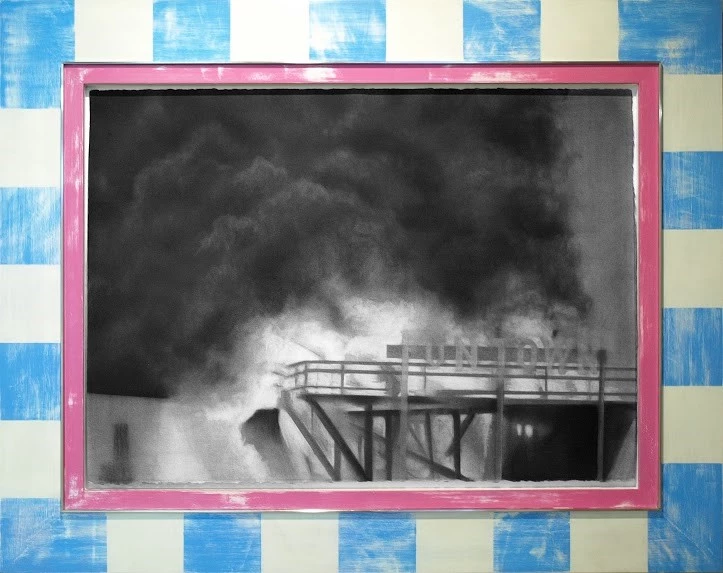 The following is a casual conversation I had with Kyle Beal in regards to his exhibition “Kyle Beal Presents: 16 High-class Attractions and Amusements” and “A Sideshow for A. King”. This interview took place at the Estevan Art Gallery and Museum on April 19, 2018.

Amber Andersen) What is Funtown? How did you stumble upon it and why was it your inspiration?

Kyle Beal) It as an internet story, a byline, a small story of this place that burned down after being hit by Hurricane Sandy. A double tragedy, in a way, I liken it to the comic stumbling on tripping on a rake only to break your fall by placing your finger in an electrical socket. The irony of the such sad things happening to FunTown. That appealed to me right off the bat. I did a little research, so I thought I would do a drawing of this and I found a lot of images that were interesting and some (of the images) were newsworthy and some were taken on an amateur level. I thought that this could be a series of drawings and the images are compelling to me and they are fun to make. A lot of the images were captured online and printed off as poor-quality images so there is a little filling in the blanks with some imaginary details. The images still have a fun and realistic look but are still plausible in their realism.

AA) So! Are you exploring nostalgia?

KB) Not specifically. It is the font and the frames that add that counter point, you know if they were all (the drawings) in black frames, they would be very stark, dry and dark. The frames act as a counter point and in the way the King prints are evocative of the pleasure you would derive from a carnival. I am just resistant to the word nostalgia.

AA) Nostalgia can be very dangerous!

KB) I see it as a papering over details that are unpleasant. For me, I actually try to be critical of nostalgia.

AA) So obviously “fun” seems to be an important aspect to your work, as an observation. There is such a literal quality of fun to your work, we see that you have brought that to the stylization of Andrew King’s works out of our collection. Has that always existed in your work, is it something that you explore consciously?

KB) I think it is a conscience decision to…I mean, I also just make works that reflect my personality to some degree. I like telling jokes and having a chuckle. I don’t think my work is necessarily funny but if you are laughing you are critically engaged in some way or another. It is an accessible form of criticism at its best.

AA) A Chicken In Every Pot or How To Cook Your Own Goose, tell me all about this piece!

KB) I made for the Esker (Foundation in Calgary). Both Calgary and Estevan are oil towns and dependent on a limited commodity. (Their dependency is) like gambling really. I was trying (to explore) different traditions, within the (western hemisphere) specifically. The idea of carnival games as a rigged game, street life, the store front or kiosk style business that we do not have anymore, the notion of a chicken for every pot coming from a governing-for-all-Society of abundance. So everyone would have a chicken in their pot as opposed to the negative of cooking your own goose, killing the golden goose, a culture maybe, you know where in some ways it is like a rigged carnival game in a lot of ways…. So many things are depending on your feelings of being able to win versus the reality of being able to win. This piece is just really about life in general. Life is chance, just a sentiment of, I guess, that little bit of duality.

AA) The deconstructed pieces mimic broken down fair rides, for me, is this their intention?

KB) They are just fun and silly in a way. They are exploring the carnival vernacular in a way, so blinky lights are attractive and they are supposed to be ramshackle as they are constructed on the fly and cobbled together. For me it was a way to loosen up, I think with my practice I come across as care free, I feel I try to control the meaning and outcomes. So, with the light frame works, it (become a way) to create a little freer and not necessarily have a message or just having a general thought and to be a little more playful in terms of what can happen materially.

It is about flushing it out in an medium appropriate sort of way. If you want to make work about blinky lights and electricity, a drawing doesn’t make sense. I have always enjoyed diversity in my own practice and I see value in that as opposed to sticking to one thing. I go by idea, I think for myself and I work in series, as opposed to having an overarching creative brand.

AA) The frames surround the works seem to be as of much consequence as the works themselves. What inspired that choice?

Well working as a picture framer for ten plus years, in a way, they are inspired by Willam Kurelek. He worked as a picture framer, so the best ones end up with specific artist-built frames. He and Alex Colville did artist frames and so for this series, I was thinking of the artist frame as an extension of it. I came up with this idea to have the fun park really referenced in a colourful and flashy way, so it was not just the doom an gloom of the drawings but a very friendly package that complimented the work.

AA) When I think of fairs and I think of the visuals on the rides and what they can get away with, in regards to content, I am always surprised!

KB) They (carnivals/fairs) are a free zone of social mingling. Traditionally it was a place that was less inhibitive, social immigration and social strata mashed together. When I was doing research, one of the things I learned was their importance in breaking down Victorian social norms. They acted, and still do in ways, as a semi-controlled environment where as we all live in controlled environment. I liken this attitude to modern day Mardi Gras, where one acts and does in a way they normally might not.

AA) What are you reading?

Mirror, Mirror a novel on the history of mirrors. Mirrors are so ubiquitous now, but so important to the development of modern life. The principal of mirrors and reflection, that face that we have telescopes, and other technologies. Mirrors have played a huge roll in Western ethnological development and narcissism. I am also reading “Evicted” which is about unstable housing and people renting at the lowest level and getting kicked out and how that ripples into so many aspects of their lives. Such a sad book, in that systems are in place to keep people down.

AA) What is one piece of advice you would give to emerging artists?

I don’t know if it is advice per se but you have to be your own cheerleader and there is selfishness and not necessarily in a negative sense but you have to say no and make time to do things (your practice). You always have to say no to something that might be more potentially fun than the thing you have to do. Perhaps this falls more under advice, you simply need to know that rejection is not personal. There is lots of it. It is hard, when you are making artwork, because it always pertains to some aspect about you.

Kyle Beal (1978) holds a diploma from the Alberta College of Art and Design (2001) and MFA in visual art from the University of Victoria (2004). Beal’s studio-based inquiry augmented by research, uses traditional media (primarily drawing) along with interactive and electronic sculptural objects to explore ideas related to language, comedy, and interests tied to day to day life from looked over details to broad generalizations. Beal has exhibited throughout Canada in solo and group shows, and his works can be found in a number of private and corporate collections. He has participated in a number of residencies, most recently at the Banff Centre (2016). Upcoming exhibitions include a solo at Viviane Art (2018) and Series Exhibition at the Nickle Galleries at the University of Calgary in 2019. In Calgary, Kyle is represented by Viviane Art.

A Chicken In Every Pot Or How To Cook Your Own Goose, Mixed Media, 2016