The central task of Indigenous contemporary art is to creatively express and deepen Native identities as contemporary modes of being. This is not easy. What it means to be Mi’kmaq, for example, is difficult to tease apart from the sticky threads of colonial repression and re-education. And if you do manage to preserve or salvage some essential Mikmaqness how do you live it without becoming a museum piece or collapsing under the stress of irreconcilable difference from mainstream society? If you picture authentic Nativeness only as traditional culture, contemporary art is its antagonistic and colonial opposite. However, if you recognise Indigeneity not as a static set of things and behaviours but as dynamic ways of being and doing in a particular territory and if you engage contemporary art as a set of tools, techniques, venues, and discourses amenable to Native use and intervention, then you can imagine and practise ways of being both creatively Indigenous and contemporary. This is Jordan Bennett’s project. He begins by diving deep into museum collections. Avoiding the undertow of ethnographic texts and their colonial agendas, he examines his Mi’kmaq and Beothuk ancestors’ belongings directly, not only as aesthetic treasures but also as embodied modes of being. And when he surfaces, it is not into an imagined space of anachronistic Nativeness but into the current world of cities, rapid travel, electricity, new media, and a non-Indigenous majority. 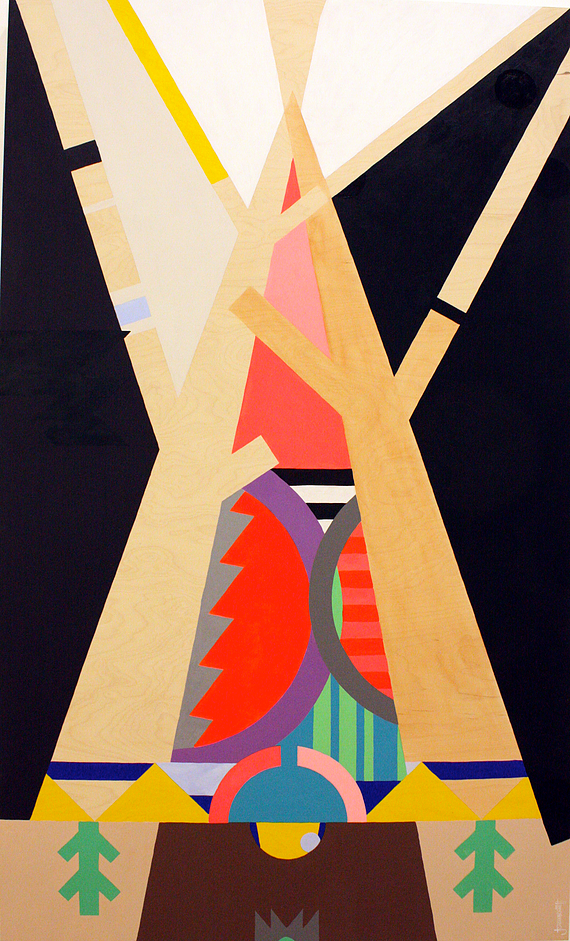 Very little remains of ancient Beothuk and Mi’kmaq material culture. There are Beothuk pendants and small carvings, Shanawdithit’s tantalizing drawings, and transitional objects, European furniture decorated with Mi’kmaq quillwork whose designs echo ancient patterns and worldviews. But these things whisper rather than sing: their teachings muted by generations of colonial suppression. But Bennett’s gaze is not melancholic, one that looks for sad pleasure in loss. Instead, his is the attitude of a maker who recognises a fellow artist’s enthusiasm for new materials and techniques. Europeans introduced novel dyes which Mi’kmaq artists adopted. Hot pink quills are not conventionally associated with traditional Indigenous art! Is something essentially Native lost with intercultural influence? Not if you recognise adaptation as essential to Indigenous modes of being.

From a Native point of view, old objects are relations enlivened by visits. They transmit teachings. While their semiotic meanings may be obscured by time, their haptic teachings are timeless. But such knowledge is partial if only passively received. Fuller meanings come only with (re)creation. Indigenous (re)creative research requires not just looking and touching, but also developing relationships with territory, with contemporary makers, and with actual making. Following his forays into the museums, Bennett sought out living Mi’kmaq creators from whom he learned how to carve, quill, and weave. And he went to the West Coast to learn from Dean Hung, a Heiltsuk carver whose traditions were kept and are powerfully revived. Bennett honours the ancient belongings not through awe, or mournful worship of their hoarded bodies, but by incarnating their spirits in fresh materials. Such making reconnects us with our ancestors as synchronous beings. We feel them in our mutual making as contemporary to their times and to ours. However, while faithful copying is a good way to learn and preserve tradition, adaptation and invention is necessary for cultural relevance and survival. A key teaching Jordan Bennett received from his Beothuk and Mi’kmaq ancestors/fellow artists, is that adaptation and innovation is Indigenous. Just as they made use of imported technology, and adapted their designs for new uses, Bennett both recovers his culture and makes it current, meaningful to people living in the present who struggle with contemporary concerns.

I describe Bennett’s work as “seeming abstractions” because few Native peoples make actually abstract art, not in The Oxford English Dictionary sense of the word: “art which is not founded on an attempt to represent external reality, but rather seeks to achieve an effect on the viewer purely by the use of shape, colour, and texture; of or relating to art of this kind.” Nearly all of Mondrian’s flat grinds of pure colours, white, and black, for example, are abstract; but not “Broadway Boogie Woogie.” Thought it resembles the others, it is actually meant to be an aerial view of Manhattan. Most of Malevich’s Suprematism works are non-objective, but not the early ones, such as “Boy with Knapsack” (1915). Although it consists only of a black square and a smaller red one on an off-white ground, as the title suggests, it is a simplified representation of a scene from the world of appearances. The full title is “Painterly Realism of a Boy with a Knapsack – Color Masses in the Fourth Dimension.” It is a transitional work whose title clings to representational tropes while also evoking a Platonic realm of pure form. 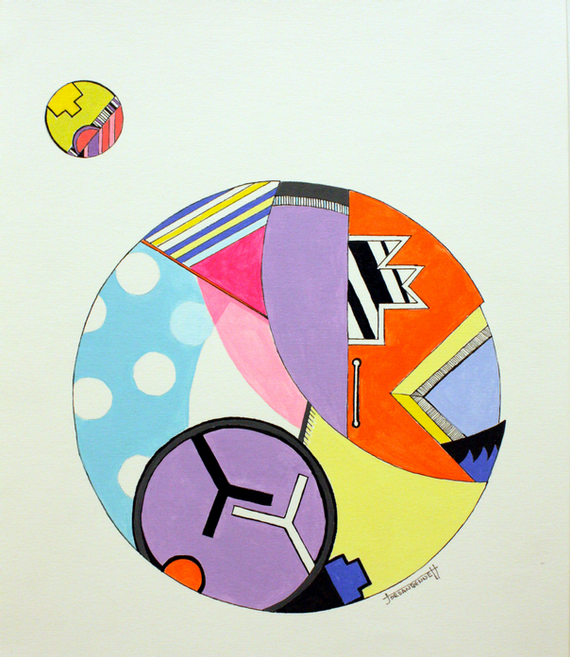 I am not keen on the Oxford English Dictionary definition. It reads better as a description of non-objective art. The vast majority of art works people call “abstract” do reference the world of appearances, they abstract from that world. And even the ones that claim resolutely not to imitate things in the world do; they reference other abstract paintings! Malevich’s first paintings, for example, referred to Russian religious icons. His later ones referenced and resembled his earlier ones. Jordan Bennett’s ‘abstractions’ do not copy Beothuk and Mi’kmaq belongings, but abstracts them. But he also echoes Modernist European and American art history (Kandinsky, Sonia Delaunay, Held, Marsden Hartley, Arthur Dove…) and, perhaps a little Bob Boyer (Métis). And he includes numerous other territorial and personal travel clues (canoes, waves, mountains, tipis, buildings…). My preference is to call works that truly do not intend to evoke the world of appearances non-objective. Non-objective artists do not wish their works to be illusionistic portals to the real world; they are materialists who want us to take pleasure in the formal qualities of their materials and compositions. To see ‘the world’ in them misses the point. Of course, we cannot help ourselves. We are meaning-making beings; we see representations in many things that do not intend to picture. I see non-objective painting as non-Indigenous because it endeavours to separate itself from the world. I know of no Native artists who buy into this philosophy.

This diversion was an attempt to show how Jordan Bennett is not only heir to Native aesthetic traditions but that he also engages Modern and Contemporary Euro-American art and thought. Allow me to firm up the relationship with a short discussion of a living bridge to these two traditions. While I appreciate the elegant formalism of Mondrian and Malevich’s non-objective paintings, I find the ones that look non-objective but have titles that direct me to their abstracted version of the world more moving. Similarly, I find Alex Janvier’s seemingly non-objective paintings that never-the-less describe his territory, and the ones that evoke the metaphysical, more engaging than his apparently non-objective ones. Janvier’s “Insurance on the Tipi” (1972), looks like a non-objective painting, but its ironic title conjures Native people’s collision with colonisation, capitalism, the privatization of property, and the preference to mitigate risk. Of course, you can ignore the title and enjoy its formal qualities, or read the title and try to infer what he thinks, feels, senses, and intuits about the world. Like his European art uncles’ “Broadway Boogie Woogie” or “Boy with Knapsack,” Janvier has his bannock and eats it, too! 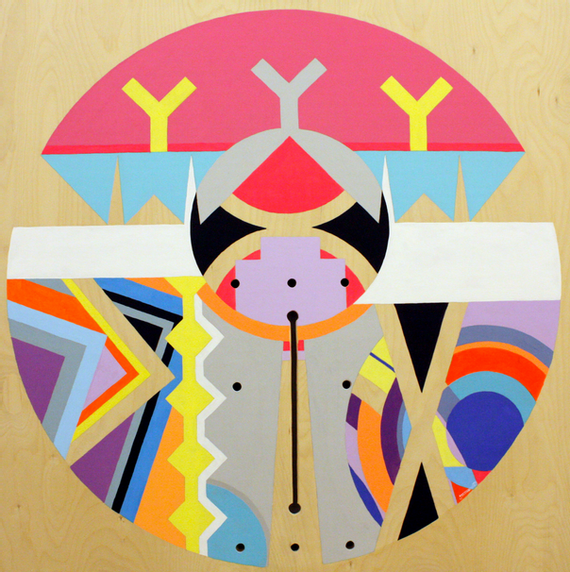 Janvier has numerous paintings and prints in collections some might think hostile to his ethics. I once asked him about works he had in the collection of an oil company who were engaged in questionable environmental practices in his home territory of Cold Lake, Alberta. He told me “they don’t know what they have!” In further discussion, I understood that the paintings were maps of the Cold Lake area, that they were land claims, that they were reminders of the real territory invisible to resource extractionists’ eyes, that they were witnesses. This potential for Indigenous art in non-Native spaces is a strategy Jordan Bennett also engages. Even if the specific meanings and references of his seeming abstractions are not legible to most viewers; that they signal Mi’kmaq presence is legible. Whether worn as pendants or tattoos on Mi’kmaq bodies, or appearing as murals on buildings to remind guests that they are on Mi’kmaq territory, these art works wordlessly embody Mi’kmaq renewal and sovereignty.

David Garneau (Métis) is Associate Professor of Visual Arts at the University of Regina. His practice includes painting, curation, and critical writing. He recently co-curated (with Michelle LaVallee) Moving Forward, Never Forgetting, at the Mackenzie Art Gallery in Regina, and With Secrecy and Despatch (with Tess Allas), for the Campbelltown Art Centre, Sydney, Australia. Garneau has given numerous talks in Australia, New Zealand, the United States, and throughout Canada. He is part of a SSHRC funded research project, “Creative Conciliation;” and is working on public art projects in Edmonton. His paintings are in numerous public and private collections.

Jordan Bennett is a Mi’kmaq multi-disciplinary visual artist fro Stephenville Crossing, Ktaqmkuk (Newfoundland). Jordan has shown extensively in Canada and abroad, in venues such as The Museum of Art and Design, NYC, NY; Museum of Contemporary Native Arts, Santa Fe, NM; Project Space Gallery, RMIT, Melbourne, AUS; The Power Plant, Toronto, ON; Musée d’art contemporain de Montréal, Montréal, QC; Institut du Monde Arabe, Paris, France; The Vancouver Art Gallery, Vancouver, BC, and most recently was one of two artists to represent Newfoundland and Labrador a the 2015 Venice Biennial at Galleria Ca’Rezzonico, Venice, Italy. Jordan has recently been long listed for the 2016 and 2015 Sobey Art Award, presented with the Newfoundland and Labrador Arts Councils Artist of the Year, received the Excellence in Visual Arts Newfoundland’s Large Year Award, and named as one of the artists in the 2014 Blouin ARTINFO’s Top 30 under 30 in Canada.

Jordan’s work explores a combination of observations and influences from historical and popular culture, new media, traditional art forms, political issues, and his own cultural practices through the processes of sculpture, digital media, installation, painting, sound installation and various other media. Jordan recently completed a Masters Degree from the University of British Columbia Okanagan with a particular focus on exploring Mi’kmaq and Beothuk visual culture and histories.